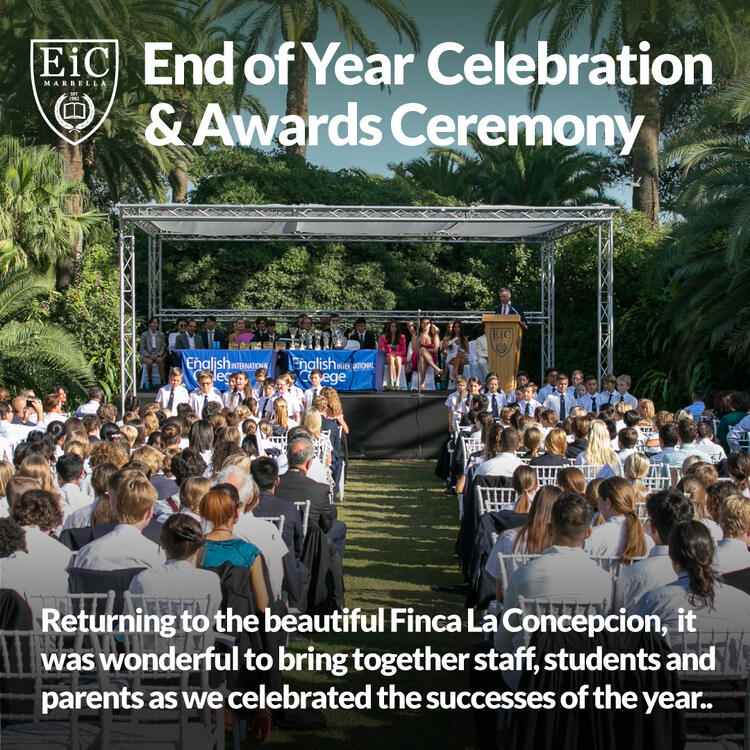 On 30th June, we held our End of Year Celebration & Awards Ceremony. Returning to the beautiful Finca La Concepcion, and in the cooler conditions of the early evening, it was wonderful to bring together staff, students and parents as we celebrated the successes of the year and saw our Year 13 students graduate from the school. Alongside the traditional awarding of prizes and certificates for academic achievement, the event was marked by fabulous musical performances from a number of students, and our Head Students concluded their time at the school with heartfelt, and entertaining, speeches.

A huge congratulations must go to all of the students who were nominated for an award. Although there can only ever be one winner, it is tremendous to see the number of students whose hard work and dedication to their studies throughout the year are recognised in the nominations. Equally, the students who were fortunate to win each award know that they have done so from a very strong field; for the prize winners you can see over the next few pages, the award is testament to the efforts they put into their work on a daily basis. We were highly fortunate to have Mr Ali Parandeh in attendance to give out the prizes. Ali is one of the earliest graduates of EIC so it was fitting, as we approach our 40th year anniversary, that he could return to distribute the awards and send the students on their way with inspiring words to follow their passion.

Of course, as is tradition, the event concluded with the roll call of our graduating students, each one called to the front of the stage in turn to celebrate their time at the school. They have been wonderful ambassadors for the school throughout the time they have been with us, and with university destinations such as Imperial College, King’s College London, Hong Kong, New York and Delft to name just a few; they have a very bright future ahead of them.